The Alexander Technique as we know it today started with one actor’s vocal problem.

F.M. Alexander, whose observations underly what is known today as the Alexander Technique was born in 1869 and as a young man was an aspiring actor. Unfortunately, he had a vocal problem and would regularly get hoarse while performing. The doctors said he was fine. Just rest your voice, they told him. Which he would do. But the problem persisted.

Alexander thought he might have been doing something himself that was causing the loss of his voice. So he arranged mirrors and recited. And he watched what he did. What he found was that when he went to speak and project his voice, he would stiffen his neck and pull his head back and down toward his body. As he observed further, he noticed he wasn’t just stiffening his neck, but also his back, legs, and feet, too. So to recite, he was tensing himself from head to toe.

As Alexander continued to explore, he found what he was doing with his head and neck seemed to make all the difference. Like a master switch that affected everything else, if he was able to not tighten his neck and pull his head back, the rest of the stiffening in his body seemed to take care of itself. And most importantly his voice improved.

As he further explored projecting his voice and not tightening his neck, he realized not only did speaking cause this unwanted habit to kick in, just thinking about speaking caused the habit to rear its ugly head. He realized there was a connection between his thoughts and his actions — or his mind and his body. And he couldn’t ignore it if he wanted to solve his problem.

People noticed that Alexander had been able to solve his vocal problems and started to seek out his help. At first, he helped people with breathing and vocal issues. But he soon found he was able to help people with other issues as well, where current medical treatments weren’t effective — by addressing the underlying habits that were causing or exacerbating their symptoms. He devoted the rest of his life to developing what is known today as the Alexander Technique and training teachers to carry on his work after his death in 1955.

Today the Alexander Technique is often—not incorrectly—associated with improving posture. Often posture is thought of simply as your alignment. But there’s more to it than that. There’s another aspect of posture that’s often overlooked—your patterns of tension or what is also known as postural tone. The Alexander Technique focuses more on teaching you about your patterns of tension than finding some ideal shape to assume.

Your habitual tension patterns are intertwined with things like how you think, react, and focus your attention, as well as your emotions. These patterns of tension can be very deep and subtle, and it takes time to wake up to them. But it can be an interesting, fascinating, and rewarding journey of self-discovery—if you decide to take it.

Alexander wrote a book called The Use of the Self (1932) and that is exactly what the Alexander Technique is all about—it’s a Study of the Use of Your Self.

If you’ve ever tried to change a habit, you’ll know it’s darn difficult.

And even if you try to imitate or copy someone doing something, you’re not always doing what you think you’re doing.

Because of this F.M. started to use his hands to help his students. Over time he developed a way of teaching using gentle touch to communicate what he wanted his students to understand. This gentle hands-on approach is still a hallmark of Alexander teaching today. 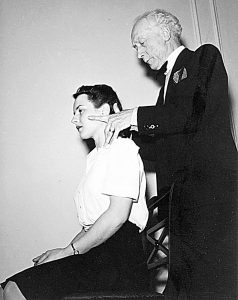 F.M. working with a student in London

Alexander teachers are now spread out across the globe, with large numbers in the U.K., Israel, Germany and the United States.

Pain: back pain is one of the major reasons that people seek out the help of an Alexander teacher. But people also come for help with chronic neck and shoulder tension, headaches and repetitive strain injuries. People who deal with chronic conditions such as arthritis, osteoporosis or scoliosis can also benefit from learning tools to better manage their conditions on a day to day basis.

In 2008 a large randomized control study was done in the U.K. to study the effectiveness of Alexander lessons for people with low back pain.

Performance: People will come to get help performing better at a favorite activity, such as theater, dance, music or athletics; or to simply do their everyday activities with more ease.

Once students experience improvement with what originally brought them in for lessons, they often see how the skills of the Alexander Technique can be used as a preventative tool going forward.

And that’s where the Technique’s true value lies. For it doesn’t just help you to solve your problems but gives you the understanding and skills to continue to take care of yourself for the rest of your life.

Photograph of F.M. Alexander © 2002 The Society of Teachers of the Alexander Technique, London